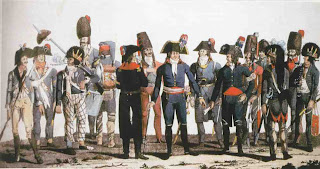 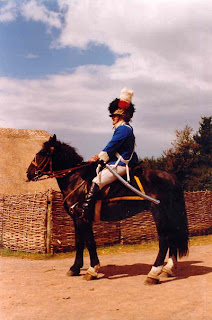 I was in Bath library avoiding the rain yesterday and picked up a copy of Last Invasion: Fishguard 1797 by Teddy Thomas. A damn good read about the doomed invasion of Wales by a small force of Revolutionary French irregulars who were the dregs of the gaols of France and then despatched to a largely Welsh speaking area to raise the cause of liberty. Led by an American, Tate, whose parent had been killed by British allied Indians and hated the English. The Legion Noire proceeded to get drunk and pillage the area before surrendering in a pub. Great stuff. Make a great anti epic movie - Blue Peter did a nice film of it in 97...all the buildings are there (see pic). Photo of recreated Yeomanry cavalry from this excellent cavalry page. Yeomanry were the part time soldiers who took the surrender of the French army - note the Tarleton headgear fashionable at the time.
Picture of French troops of the Army of the Rhine 1796 from here
Posted by Ralphus at 9:00 am