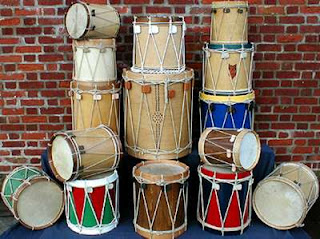 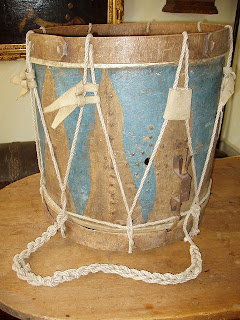 do is organise a virtual regiment of Swedish soldiers to show you how its done, to encourage people to create their own Great Northern War regiment and so on and you are all hereby forced to sign up.
How to start?
Drums First up as I am a bit of a musician I would create the drum section. Being lazy I would get in touch with some experts on the period in this case the Swedish group the Nerike Wermelands Caroliner and I would get the dimensions of the drums of the period - pictured on their website and acquire two field drums of the style and paint them up accordingly. I would buy two from Marcus Music in Wales (see picture) - the prices and quality are very good and reliable.
Next thing would be to train up two drummers. I used to have two field drums and they make a lot of noise so I would go out to an abandoned quarry like we used to to practice and march about making some beats. Of course what to play is maybe a tricky thing if the research isn't out there but if not I would use French examples. After a few weeks practice sessions let's assume we have two reasonably well trained drummers capable of keeping a beat while marching and so on - what's next, you keenly ask? Assuming we are reasonably well heeled the next thing - this being the UK I would order some pikes - long spears - about 12/16 in number - they're not expensive and you can drill anywhere you like and it's a good start for people not used to handling muskets.
In the meantime if you are keen you would be reading up on the army of Charles XII, visit some websites maybe learning a bit of Swedish and if you are really keen I'd get you to order a pair of handmade shoes from Sarah Juniper - the best historical shoemaker in my opinion in this country. See you next time.
Posted by Ralphus at 8:17 am