You probably know I am a bit of a Russophile - probably something to do with them stopping Europe becoming a Nazi colony during WW2 - anyway one thing I do know is that there are some great historical illustrators and sculptors working out there - usually fairly unsung in the West too. I've never heard of this fellow before but his early 18th century work on the Drabant miniatures site is, as the Americans say, awesome. I will be featuring some of the best in the next few weeks as I hopefully generate some interest in the early 18th century.
The text reads; 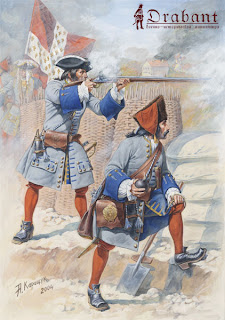 The picture shows musketeer and grenadier of Languedoc Foot Regiment. This Tallard’s regiment was one of the most famous and dangerous in French army. Most French musketeers had leather cartridge box on a belt. Grenadiers of the regiment wore tall fur hat with long cloth cap, unlike soldiers of many other regiments including Guards. French grenadiers necessarily wore moustaches. Grenadiers were armed with firelock muskets and sabers instead of epees.

Hopefully you will check out his other early 18th century artwork on the Drabant site - some of the best figures on the market in 40mm scale, including Swedish pikemen and drummers - see below. The paintings I have been told are available as prints on order from the Drabant site.
Posted by Ralphus at 8:02 am