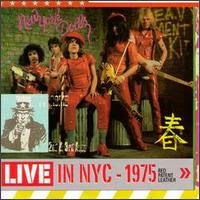 Songs are 'Red Patent Leather' 'On Fire' and 'Something Else'. I've been listening to the Dolls on vinyl recently - its great to hear them after a lay off and I also have been playing the Red Patent Leather live album and there's some great songs on there - a lot of them forming the basis of solo sets for the individual band members, although 'On Fire' which is a great song I don't think appeared anywhere else. Maybe it was a co-composition. This clip captures them quite nicely - shame its not in colour but you can't have it all can you?