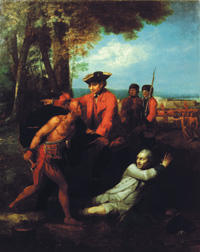 This year is pretty significant in the form of anniversaries and the like - it is the 250th of the year 1755 - the year when everything kicked off with the French and Indian war - or the Seven years war. Events of 1755 are here http://www.sevenyearswarassociation.com/Reference/SYWChron1755.html
This is a period much favoured by filmmakers, novelists and the like most notably 'Lsst of the Mohicans' 'Northwest Passage' (about Rogers Rangers rather than the passage of the title which only comes in the end when they set off to find it!) and soon the already mentioned 'Nouvelle France'.
The early battles of this war being celebrated this year in and around upstate New York and so on are pretty spectacular affairs so if you're in the states go to www.frenchandindianwar250.org
In the UK check out http://www.nfoe.org.uk/
Posted by Ralphus at 11:22 am

Better get that VPN configured before logging again on an open Wifi hotspot
On the first day of Bar Camp, Jacob Jake Appelbaum did a brief talk on Wifi/IP network hacking.
Hey, you have a great blog here! I'm definitely going to bookmark you!

I have a make money site. It pretty much covers make money related stuff.

Come and check it out if you get time :-)