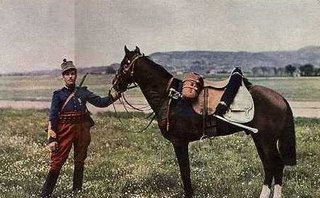 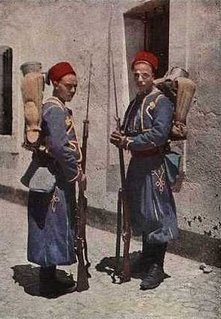 To say the French army of 1914 was colourful is probably an understatement. Going to war in red trousers and a red kepi may have seemed like a great idea to the politicians who thought it essential for the national glory but it made the poor French soldier a beautiful target for the accurate rifles in use at the time. African troops also went to war in outfits that to the 20th century eye look more Hollywood than practical. With almost a Lemming-like zeal the brave but foolhardy French officers in white gloves led bayonet charges against machine guns. Cavalry wearing the breastplates and helmets of the Napoleonic era clattered nobly in the streets of Paris but were denied the chance for epic charges in an era when artillery devestated masses of horsemen with ruthless effect. Soon things would change; first covers were issued for the red items and then a horizon blue uniform was introduced as well as a helmet - the age of romantic warfare was dead and a new more determined France dug in for the long haul.
What I would like to see - and I think it will work a treat - is to see a 1914 era French unit recreated by Germans. German reenactors I think would love to do this kind of unit and I think it could be a lot of fun. Basically it is an era where you can enjoy the finer things in life - red wine, absinthe, great art and grow a fine moustache. Of course it's just an idea, but one to think about for a few years and then prepare for 2014. French colour photos from the excellent Great War in a Different Light site. French uniforms are available at Italian Front.
Poilus de la Marine -French reenactors
151eme - US based group with detailed equipment pages
photos 14-18
Virtual Museum